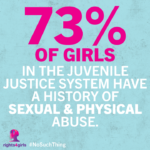 Responding to youth damaged by child abuse and childhood trauma is a significant (often unrecognized) problem for law enforcement.

Statements by a growing number of sheriffs and chiefs about policing community social ills and mental health with centuries old force and punishment models are becoming more common.

Decades ago, a MN Police Chief in a mid-sized city of (over 10,000) confided that he would be removed from his position if he were to repeat to the city council what he had just told me about the core issues his officers were dealing with every day.

Since then, my city and many others are experiencing growing community dysfunctions and dissatisfaction in the methods and outcomes law enforcement practices.

This article addresses the depth and scope of a problem that has been and still is growing at exponential rates, all over America.

The current approach to policing at risk youth is creating exactly what we want to stop. Even partial success in ending the current model will give results to save us from building more jails and prisons and the steady growth in crime and recidivism rates.

Most of us recognize the truth in former MN Supreme Court Chief Justice Kathleen Blatz statement that “the difference between that poor child and a felon is about 8 years”.

Few of us have thought through the corollary “the difference between that poor child and a teen or preteen mom with no parenting skills, a violent boyfriend and a drug habit, is about 8 years” and the generational child abuse this generates.

The COVID pandemic is locking growing numbers of traumatized children into toxic households of violence, sex abuse and crisis level neglect (think molested children and infants in cribs left alone for days at a time).

There are fewer classrooms to go to, fewer mandated reporters to report abuse and far less reporting from media or institutions than prior to COVID.

Abused children have no voice in the homes they live in (they don’t even know that what is happening to them is wrong), no voice in the media, the courts or the legislature.

Prior to COVID, a recent study on the prevalence of child abuse & trauma posits that 37% of America’s 80 million children are reported to child protective services by their 18th birthday unless they are from African American families where 53% are reported abused.

During and post COVID, the stresses being piled onto poor and at risk families is adding many more abused and traumatized children and a much bigger problem for law enforcement, schools and foster families in our communities.

Reporting and institutional transparency about child abuse, domestic violence and access to mandated reporters for child abuse are shrinking due to the emergency of COVID and the political and social upheaval taking place in the streets.

This means we won’t know the impact of COVID and upheaval are having on the well-being of children until the damage is done – perhaps years into the future.

We do know that the pandemic stresses of job loss, mental health and increased substance abuse are leaving more and more children in the hands of over stressed, dysfunctional and often violent caregivers.

For law enforcement policing a larger number of more damaged youth, KARA projects a harsh picture of what policing them will look like post COVID;

For children tortured in toxic homes facing out of the home authority, a reptilian reaction to that authority is common.

If you watch the ACEs studies video (the link in the sentence above) you will understand that biology and behavior are severely impacted by childhood trauma – the “why’ of a reptilian response.

We have long known what trauma does to soldiers – but few of us understand the lifelong consequences of childhood trauma.

Most could not compete in school.

Almost all of them hated themselves.

Self-harm and suicide attempts were not uncommon.

Traumatized children react to almost all authority in negative – often dangerous ways. The blue uniform is a potent trigger.

Think of it this way; by seven years old, you have been repeatedly beaten, raped or starved by your primary caregiver (authority) and now, a teacher or law enforcement person (authoritative figure) is making your life anxious/fearful and miserable again.  The reaction is hard wired and unconscious.

No rational behavior stopped the pain being delivered by the caregiver in the home. Those behaviors never worked.

Because traumatized children live with extreme anxiety almost constantly, they seldom develop a healthy executive brain function to interpret and understand what others see clearly.

Responses triggered by a hyperactive *amygdala wreak havoc for many of my kids.  They hit people, spit, swear and draw from a litany of terrible behaviors directed at those of us who lean on them to “behave”.

Nothing works for these children.

America’s centuries old aggressive punishment model a core fallback piece in police training and policy creates the opposite of a desired response from traumatized children.

America’s at risk children are expelled from daycare, elementary school and high school and incarcerated at young ages.

Remember the size and scope of the problem. Policing growing numbers of America’s 80 million children is puts more officers on the front lines in schools and circumstances that too often end badly with tasers and tough policing.

Most serious and violent crime is committed by juveniles

Pre COVID, the data was bad and it is now trending he wrong way.

These trends and numbers will impact our institutions and communities for decades to come.

The financial and social costs are already very high – COVID is making it higher.

7 states have moved to make their institutions trauma informed.

The punishment model fails at risk children and is making police work ineffective and more dangerous to law enforcement personnel, the community and the children and families they serve.

Blaming parents that grew up in the same conditions they are delivering their children solves nothing.

Interrupting generational child abuse is required to reverse these trends.

The answers are in front of us.  What will we do?

How does your department face these facts?

*My guardian ad litem kids have (literally) oversized amygdalas – the peanut sized emotive/reptilian piece of the brain that grew because of the constant state of fear and anxiety that child lived with in a violent or neglectful home.

The amygdala grows at the expense of the executive function (hippocampus) of the brain – where reason and rational thought develop.

KARA advocates for the people, policies and programs that improve the lives of abused and neglected children.

for information about KARA’s online conversations/presentations on this topic