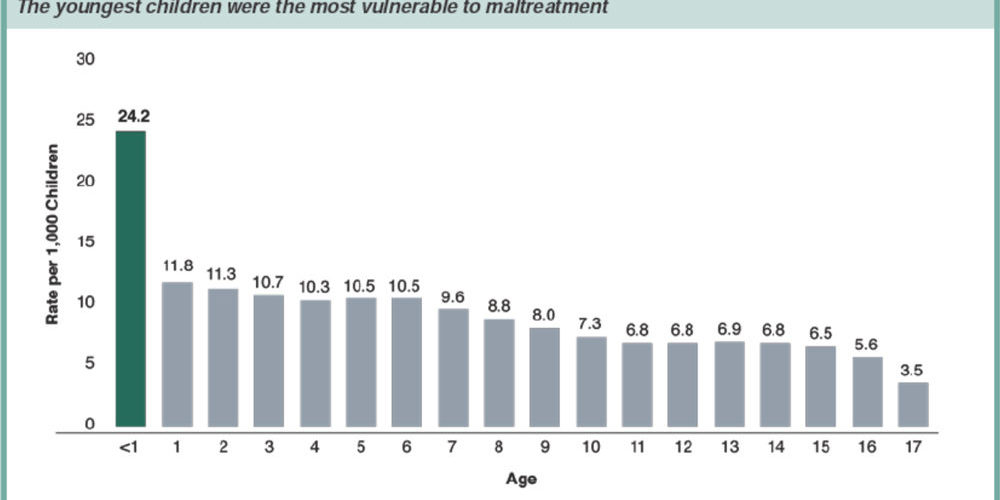 The following information is gathered from:

Child Abuse Statistics Graph – The youngest children are the most vulnerable to maltreatment. 52 states reported that most victims were younger than 3 years. The victimization rate was highest for children younger than one year of age.

Guns kill or injure a child or teen every half hour.

• In 2010, 2,694 children and teens were killed by guns and 15,576 were injured by guns. Guns killed more infants, toddlers and preschoolers than law enforcement officers in the line of duty.

• U.S. children and teens are 17 times more likely to die from gun violence than their peers in 25 other high-income countries.

The achievement gap between American students and those in top-performing countries like Finland and Korea in 1998 cost the nation $1.3 to $2.3 trillion in 2008 or 9 to 16 percent of GDP. We Can Afford to Do Better

Child Well-Being 50 Years After the Launch of War on Poverty – I n 1964, President Lyndon Johnson declared a War on Poverty in his State of the Union Address. Fifty years later, how have American children fared? Fair Start: Rich Get Richer While Working Families Struggle

• In 2012, child poverty was 5 percent lower than in 1964 but 64 percent higher than the lowest recorded level — 14 percent in 1969 — and 21 percent higher than before the recession. The Black-White ratio for child poverty decreased 26 percent from 1964 to 2012. Black children remained three times more likely than White children to be poor in 2012.

1 child or teen is killed by guns.

4 children or teens die from accidents.

13 babies die before their first birthdays.

173 babies are born at low birthweight.

285 babies are born to teen mothers.

399 children are confirmed as abused or neglected.

408 babies are born without health insurance.

595 babies are born into extreme poverty.

1,330 babies are born to unmarried mothers.

According to the Children’s Defense Fund, and former Minnesota Chief Justice Kathleen Blatz, these sad facts

explain why the U.S. spends more on crime and incarceration than any other industrialized nation. ***