What We Think Of Children In America

These are not economically viable public policies and it is making Flint Michigan’s out of dozens of American communities.  Flint MI is where if you don’t have a body in the yard when you call the police, they don’t come (and if you call after 5pm, no one answers – no police protection).

Art Rolnick and the Federal Reserve Bank have proven the high rate of return on early childhood programs and throughout my years as a CASA guardian ad-Litem, I have experienced the high cost of troubled youth, whether measured as state wards or the damage they do.

It is so much less expensive to care for children to help them attain the coping skills that will launch them into a nice life that it is to let them sink deeper and deeper into mental health and social trouble.

Read the stories below to get a clearer picture of what America thinks of its children; 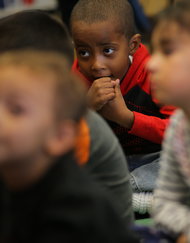 Yaqub Ibrahim in full-day kindergarten in Englewood, Colo. A proposal would make a full day the state standard.

For decades, schools like these have struggled to keep pace with their bigger and wealthier neighbors. On Tuesday, Colorado will try to address those problems with one of the most ambitious and sweeping education overhauls in the country, asking voters to approve a $1 billion tax increase in exchange for more school funding and an educator’s wish-list of measures.

The effort has touched off a fevered debate in a state that two decades ago passed one of the nation’s strictest limits on taxes and spending. It is emerging as the latest test of whether Democrats can persuade voters to embrace higher taxes by tying them to school funding.

Outside money is pouring into the state. Mayor Michael R. Bloomberg of New York, who spent hundreds of thousands of dollars to support gun control here, has given $1 million to the school campaign, as have Bill and Melinda Gates, whose foundation is one of the largest philanthropic organizations involved in public education. Teachers’ unions have contributed at least $4 million, and other pro-labor groups have given thousands.

The referendum will ask voters to replace the current flat state income tax rate of 4.6 percent with a two-tier system. Residents with taxable incomes below $75,000 would pay 5 percent; taxable incomes above $75,000 would be taxed at 5.9 percent. “Big Change. Small Price,” declare commercials supporting the measure, known as Amendment 66.

The amendment would also require the state to direct 43 percent of its budget to schools, ending the current system of tying increases to the rate of inflation.

Supporters say the measure would provide enough money to revolutionize education for a generation. Opponents, which include anti-tax groups and Republican politicians, say it would raise taxes on struggling families and businesses with no guarantee of a better education.

In 2010, Colorado spent about $9,306 per student, among the bottom 10 states in the country, according to data compiled by Education Week. Over all, the publication ranked the state’s education system slightly behind the national average.

Amendment 66 would make full-day kindergarten standard across the state. It would set aside more money for students who do not speak English, have learning disabilities or come from poor families. It would send more money toward charter schools, as well as districts in poorer areas that cannot easily raise property taxes to buy computers or raise teacher salaries. The measure would also let people go online to track how schools spend every dollar.

“Total transparency, school by school,” Mr. Hickenlooper said. “No state’s ever done that.”

The prospect of more money for all has united two usually warring factions, teachers’ unions and the charter school movement. But most business groups have either stayed on the sidelines or expressed worry about the effects of a tax increase on small businesses and job creation. Most Republicans have lined up in opposition, eager to beat back a big tax increase and deal Mr. Hickenlooper, who is up for re-election next year, an embarrassing political defeat.

The opposition is being vastly outspent. The main group opposing the measure, Coloradans for Real Education Reform, has raised $24,400, according to state campaign finance figures. Much of that comes from the Independence Institute, a libertarian research group based in Denver.

Some opponents in richer school districts also object to new funding formulas that would pump more money into poorer schools and those with more students at risk of dropping out. They say the measure’s attempt to even out imbalances between wealthy and struggling schools would just create new disparities.

“It’s a bad deal,” said Doug Benevento, a school board member in conservative Douglas County and the father of a third-grader and a kindergartner. “One hundred million dollars would leave our county. Roughly $50 million of that would return.”

In California last year, the Democratic governor, Jerry Brown, won passage of a referendum temporarily raising taxes for the first time since 2004 by framing the $6 billion tax increase as a way to save California’s underfinanced public schools. But here, the effort might hinge on which Colorado shows up to vote on Tuesday. Will it be the Colorado that legalized marijuana, embraced expanded background checks for gun sales and twice supported Barack Obama for president? Or the Colorado that, in September,ousted two state senators for embracing new gun control laws?

“It’s winnable, but it’s going to be tight,” said Mike Johnston, a Democratic state senator from northeast Denver and an architect of the education measure. “There are a lot of question marks on this one.”

Among them are new election rules that allow voters to register as late as Election Day.

As the election approaches, supporters have begun a $10 million push to mobilize voters who might otherwise tune out during an off-year campaign.

The two sides are debating each other on radio stations and at community centers. Volunteers are knocking on doors and handing out leaflets. The state’s newspapers have taken sides. The airwaves are filled with commercials offering promises that an average tax increase of $133 per household would fund more teachers’ assistants, art and gym classes and expanded early childhood education, which have been gutted by budget cuts since the recession.

Opponents said they were worried that school districts could use the money not to pay teachers or decrease class sizes but to meet their soaring pension costs.

But George Welsh, the superintendent of Center School District in southern Colorado, says the money could forestall more hard choices. Cuts have whittled budgets bare, he said, forcing the district to pare vocational programs in the high school and raise fourth- and fifth-grade class sizes to 30 students. Elementary art is long gone, and after a federal grant was exhausted, the district can no longer offer reading tutoring to all of the students who need it.

If the funding measure passes, the district stands to receive an additional $2,413 for each student, an increase of 32 percent over the current level of $7,523. If it fails, Mr. Welsh said, the district may have to cut more.

“We just don’t have the money,” he said.

The twins from Clay County remain in Women and Children’s Hospital in Charleston with bleeding on their brains, broken bones and police said more and more injuries are being discovered as time goes on. One of the babies is still unresponsive.

State Police said the injuries were suffered when their father, Richard Osborne, 29, of Wallback, snapped.

The twins both have bleeding on their brains and broken ribs. One of the babies also has two broken arms and two broken legs.

State police said doctors diagnosed them with severe shaken baby syndrome, and the twins are fighting to survive.

“I visited the babies last night, and today they’re about the size of a large house cat right now,” Trooper Brian Young said. “To see them this small, in this condition is very hard. One is responsive, she’s up eating, the other is not responsive.”

Troopers said Osborne told them he was tired of listening to one of the babies cry, so he yanked her from her rocker Monday night and squeezed her until she stopped.

The next day, Osborne realized something was wrong with her arm and he took her to the doctor. That’s when doctors realized this had not only happened once, but multiple times to both newborns because the babies had broken bones that had already healed.

Neighbor Faye Smith said Osborne grew up in the Wallback area and she was shocked at what he’s accused of doing.

“He could have asked for help,” she said.

State Police said Osborne has never been in trouble and his home on Horse Fork road was well-kept.

Osborne had sole custody of the twins and was taking care of them on his own, because their mother’s rights were severed due to an ongoing drug addiction.

“Parents need to remember to take a step back and remember how precious they are, before reaching down and touching them or doing anything,” Young said.

Since the mother no longer has parental rights because of her drug addiction, and
Osborne is in jail facing numerous child abuse charges, that means the babies are in the hospital fighting this fight alone.

State Police said social workers have been staying around the clock to look after them and of course the nurses and doctors.

The couple also has a 2-year-old son. He was checked out and physically was OK. He is in foster care.